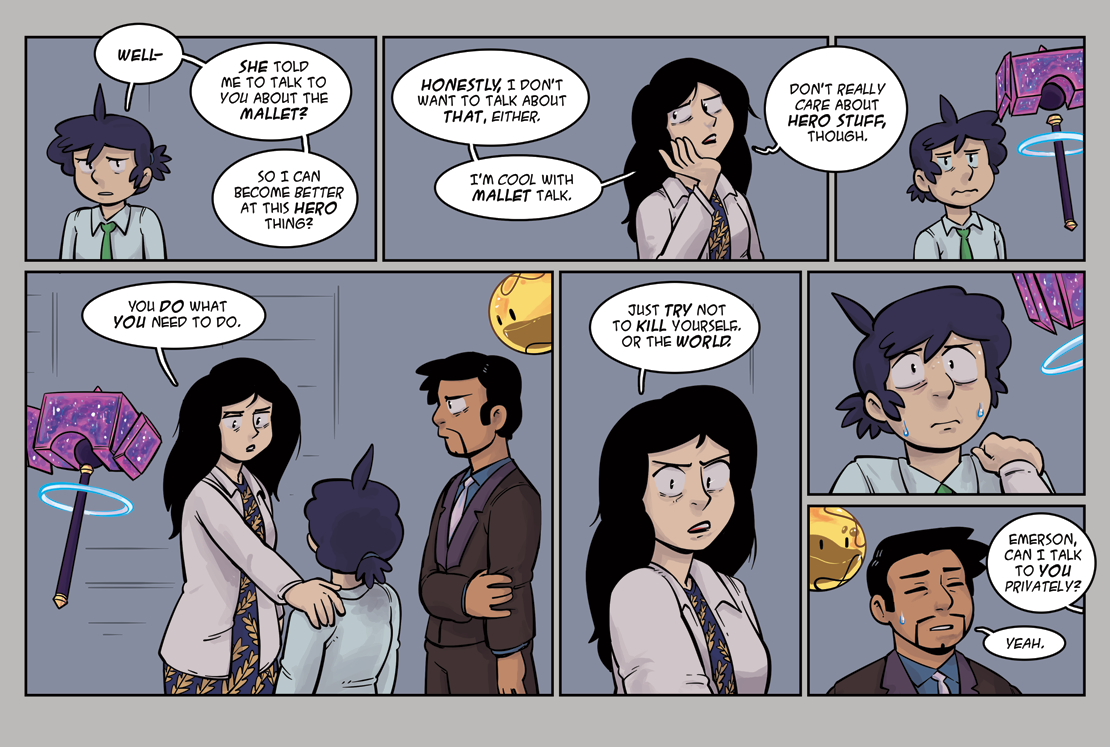 And here we are with our regular update.

Don't forget to come visit me tomorrow at FallCon if you get a chance. It's at the MN state fairgrounds. I don't know where I'm seated at yet. But I know I can tell ya tomorrow!

She's actually been mentioned twice in the comic so far. At least one of those times was by name.

She was born in Richardson, Texas in early 1986. She's not really sure of the exact date and she doesn't really see it as important either. But because her friends like to celebrate it she's jokingly chosen February 29th so parties happen as rarely as possible.

She's part of a subset of the population known as Apocalypse Babies. In late 1985, people were under the impression the world was gonna end in October of that year due to the then-recent detection of celestial objects on a collision course with Earth. So people responded accordingly, so to speak.

Those objects ended up bringing about something altogether different than the destruction of Earth, and a new age of superpowers was born. But it means 9 months later a lot of people weren't ready for the responsibility of consequences they thought they'd never have to deal with. Sybil is one of those "consequences".

She was given up for adoption and placed in one of the many "overflow orphanages" that were established to accommodate an overtaxed foster/adoption system. The one she was placed in was designated as Valentine-1. Part of a small compound in the Dallas/Fort Worth Metroplex.

She never ended up in the system and spent a lot of her time learning as much as possible. She was especially interested in the work of esteemed astrophysicist, Dr. Angela Thompson. In fact she even started corresponding with her personally.

In 1999, she ended up leaving Texas to study under Dr. Thompson. She roomed and boarded in her house where she lived alongside Dr. Thompson's only child, Danae.

She gained her first doctorate at age 16, and it was then that Dr. Thompson felt that Sybil deserved a name to call her own and officially adopted her.

Welp, I hope that answers some questions you have about Sybil!